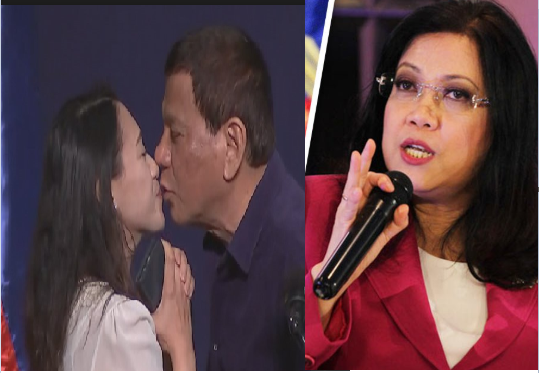 Former chief justice Maria Lourdes Sereno, has ever since been a vocal critic of President Rodrigo Duterte.

Sereno have reportedly condemned the headline-grabbing kiss of the president with a Filipina in Seoul Korea.

According to Sereno’s lawyer, Josa Deinla, who is also one of her representative, the former chief justice “cringed” at the incident.

“This is the kind of behavior that encourages or emboldens sex offenders, normalizes misogyny, sexism and gender discrimination,” Deinla said.

“He has shown this kind of behavior against strong women because of the misogyny of this government. They cannot abide women who are strong and are speaking up for themselves, who are fighting the oppressive status quo,” the lawyer added.

Recently, the president’s kiss with a Filipina expat Bea Kim had been the topic around the globe. Yes, even in international media.

The woman already explained that there was no malice about the kiss, and it was all for fun of everybody in the crowd.

However, Sereno’s camp disagreed saying the act should not be justified and that Kim was in no position to refuse the president’s request for a kiss.