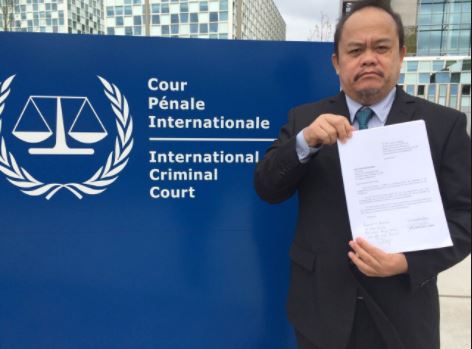 A warrant of arrest has been issued to lawyer Jude Josue L. Sabio by a Cavite court, for appearing before the court despite his non-compliance to Supreme Court (SC) rules requiring Mandatory Continuing Legal Education (MCLE).

Sabio was the one who initiated the controversial complaint filed before the International Criminal Court (ICC) against President Rodrigo Duterte.

The warrant was issued by acting Presiding Judge Emily Reyes Aliño-Geluz of the Trece Martires City Regional Trial Court (RTC) of Branch 23 directing the local and national units of the PNP Criminal Investigation and Detection Group (CIDG) and the National Bureau of Investigation (NBI) to arrest the 51-year-old lawyer.

Sabio “is to serve a subsidiary imprisonment of 15 days for failure to comply with Bar Matter No.1922 as amended,” the warrant read.

Reportedly, the warrant was issued after the order issued by the same court in relation to Sabio’s failure to pay the imposed penalty to him last February 28.

Sabio’s struggles was fueled when opposing lawyer Clarissa A. Castro in a land case pointed out that “appearance (before the court) and all his pleadings should not be taken cognizance by the court due to his non-compliance to the MCLE requirement.”

Upon Sabio’s admission that he had not complied with the requirements set by MCLE, he was then sentenced to pay Php2,000 with minor imprisonment.

“Failure to pay this fine within three days from today shall be construed as Atty. Sabio’s being insolvent to pay the same,” the court said in its order.