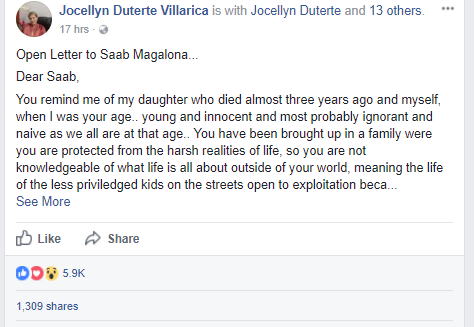 The singer tweeted “Lahat nalang joke. Kadiri,” which was likely referring to the usual Duterte jokes.

Saab though earned support from her followers, also she got equal hates from those who support Duterte.

The presidential sister even called out Saab by posting an open letter for the latter. Here’s the full post below.

You remind me of my daughter who died almost three years ago and myself, when I was your age.. young and innocent and most probably ignorant and naive as we all are at that age.. You have been brought up in a family were you are protected from the harsh realities of life, so you are not knowledgeable of what life is all about outside of your world, meaning the life of the less priviledged kids on the streets open to exploitation because of poverty and parental neglect. Even the best of the priviledge few becomes victims of drugs and the worst part is the fact that the victims are the youth, think about it! And what would happen to a nation riddled with drug addicts in the years to come?

Drugs is the enemy and not President Duterte… you can talk all you want about the president but to accuse him of killings of those young kìds is not the president’s wish nor desire! …they jùst become collateral damage in the fight against drugs…Why not ask our congressmen who supported the bill of Sen. Pangilinan.

If you have in you the ability and capacity to influence the youth, then educate them about drugs and even more so, if you have a better solution as to help our President in his fight against drugs, then by all means, do so!