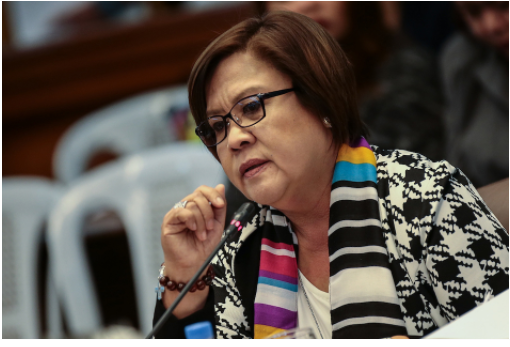 Under Senate Resolution No. 445, Senator Leila De Lima has asked the Department of Foreign Affairs to send a formal invitation to United Nations Special Rapporteur on Human Rights of Internally Displaced Persons Cecilia Jimenez- Damary to evaluate the situation of the displaced residents in Marawi City.

De Lima said that the Jimenez-Damary should take a look at the Marawi evacuees situation which she said could worsen in the coming more months due to the extension of Martial Law.

“In light of the extension of the effectivity of Martial Law in Mindanao and the worrisome conditions already reported to be prevailing in the affected areas, it is imperative for the Executive Department to invite Jimenez-Damary, to enable her to verify these troubling complaints, assess the actual living conditions of the [evacuees] within and outside evacuation camps,” Said Delima on Sunday.

Mentioning the figures from Department of Social Welfare and Development in Zamboanga, De Lima said that a total of 351, 168 individuals have been evacuated in Marawi city as of June 2017 data. While 17, 389 of them are still seeking shelter in evacuation centers.

“Among the disturbing conditions mentioned by Ms. Gutoc-Tomawis is the situation of mothers and their children in Marawi, such as the cases of three women sharing one bed in a charity ward, dead babies being buried every five days, men rescued by authorities are being asked to remove their clothes then walk while blindfolded, and of two pregnant women who were taken by the police for questioning for a whole day because they were found holding dextrose intravenous drips,” De Lima said in her statement.

De Lima also added that the government should prioritize and address the situation of displaced citizens in Mindanao, under the doctrine of parens patriae (Latin for parent of the nation -it refers to the public policy power of the state to intervene against an abusive or negligent parent, legal guardian or informal caretaker, and to act as the parent of any child or individual who is in need of protection- Wikipedia)